The pandemic has made being in public difficult, eating at restaurants strained, and taking most leisure trips dangerous or irresponsible. It’s also made things that were challenging long before COVID-19, like moving across the country, a nightmare. I experienced this firsthand when I drove cross country with my fiance, our two dogs, and a one bedroom apartment’s worth of belongings this summer. It’s possible, though difficult.

In early May, my fiancé Heather and I decided to move from New York City, where we’d lived for five years, to Denver, Colo., after her work at a Brooklyn hospital ended in June. The boundless potential of New York that drew us there in the first place had shriveled during the months of the pandemic. Jobs were scarce, and the local bars and restaurants that previously made the punishing rent worth it were dwindling, yet the cost of living was not.

Denver, on the other hand, felt full of possibilities. It was somewhere we both enjoyed, and we’d occasionally entertained the thought about moving there if the opportunity was right. We were vindicated when Heather secured a job relatively quickly despite the pandemic. So, after months of navigating life in one of the epicenters of the pandemic, it was time to navigate a cross country move on a tight budget.

We took some solace in the fact that we’re far from alone in our decision. A Pew Research Center survey published in June found that about a fifth of Americans either moved due to COVID-19 or knew someone who did. But it’s not just people who are relocating that are trekking across the country. Road trips have soared in popularity as a safer, though not entirely risk-free, way to travel — a study from the Maryland Transportation Institute found that Americans took more trips in the weeks before July 4 than they did the previous year, and the data suggests many were road trips.

The open road is less likely to put you in a risky situation than, say, a crowded international airport as long as you’re properly prepared. But it won’t be like any road trip you’ve taken before.

How we planned a cross country road trip

We went with one guiding principle as we planned our 1,800 mile or so route: Make as few stops as possible. We had to stop in Missouri to pick up another car, so we decided that would be our one and only overnight stop. This meant 18 or so hours the first day, and then a straight 11 hour shot to Denver.

While we would have loved to have been able to control how many pit stops we took, I was driving a 17-foot U-Haul that guzzles gas like the Cookie Monster downs cookies. Plus we had our English bulldog named Daisy and our Pomeranian-Chihuahua named Scout up in the cab of the truck with us. The need for pit stops is one of the inescapable truths of the summer road trip, as are hours of road construction. We attempted in vain to shorten the former with stocks of water and snacks, but there’s nothing you can do about lane closures and miles of orange cones, pandemic or no pandemic.

We were lucky enough to have family to stay with in Missouri so we didn’t have to navigate dog-friendly hotels (a difficult task even in normal times). Camping was the backup option. Interest in camping has gone up right alongside road trips thanks to it being an outdoor activity where each campsite is social-distancing-approved. Sleeping on the unforgiving dirt before a days-long drive would have been hard to swallow, though. For people who choose to go the hotel route, it’s important to call the day of your reservation to confirm. Safety protocols are changing fast, and the last thing you want on a road trip is to be stuck with nowhere to sleep but your car — especially if your vehicle is small or is a three-seater U-Haul filled with two dogs and two people.

Plan on being uncomfortable and plans changing

Flexibility, we learned, is key. That went for finding ways to be comfortable in the car as well as for being comfortable with our risks. Coronavirus experts around the time of our planning and as of now suggest that spread through contaminated surfaces is possible but ”not thought to be the main way the virus spreads.” Studies show that the low viral load on outdoor surfaces in particular is less of a concern than initially thought. With that in mind, we opted for plenty of handwashing and hand sanitizer but against using gloves every time we touched a surface. 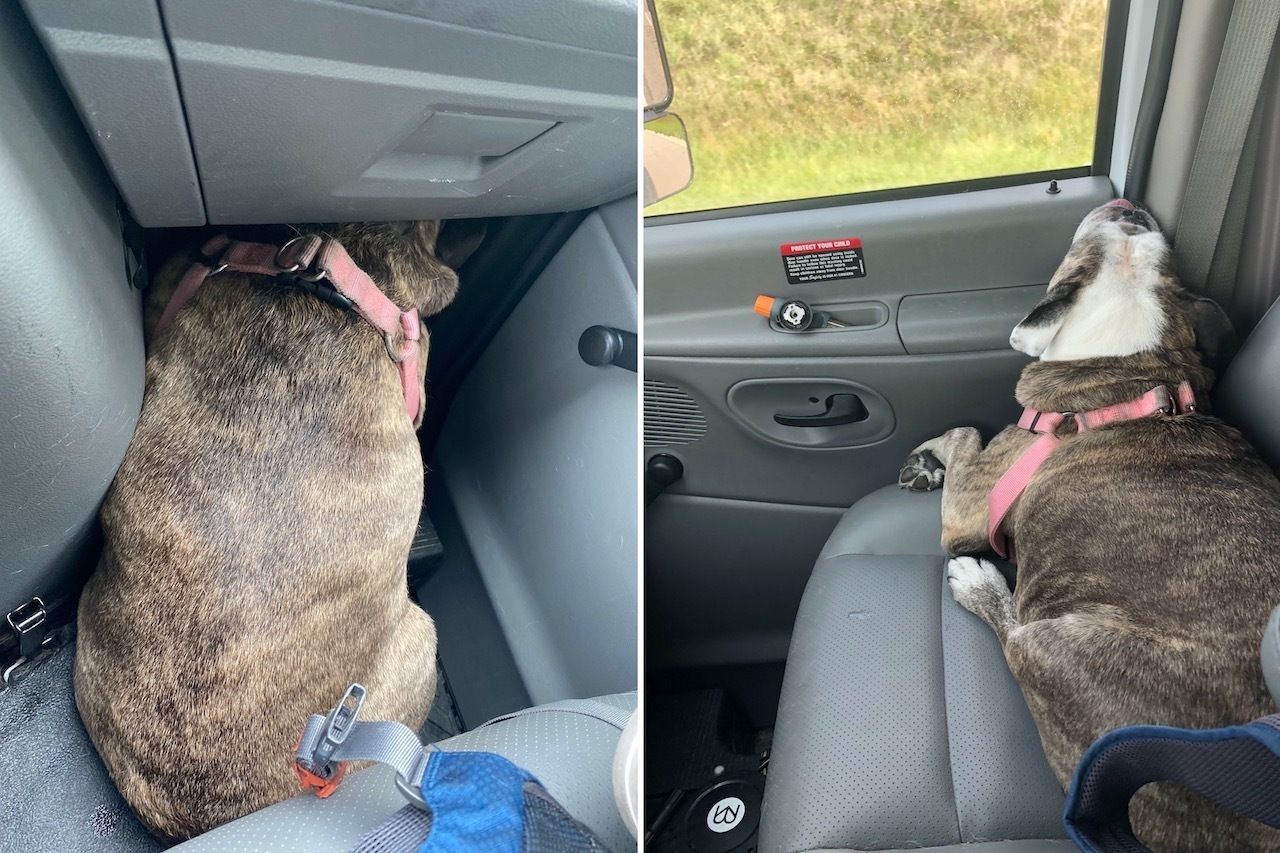 Face-to-face conversations — especially those without a mask — are another story. Seeing more people in various towns than I had in the past three months pushed us to rush through every snack and bathroom stop (a study about “toilet plumes” that can shoot aerosolized droplets of coronavirus-infected poop into the air didn’t help). This was made all the more complicated by the patchwork of state mask laws at the time of our drive.

We quickly learned that the only consistent trend in mask use was that we had to change our expectations at every stop. In Ohio, I caught side eyes for wearing a mask from the maskless attendant and five other customers as I grabbed some beef jerky and a water bottle at a BP gas station. In Missouri, I made it to the door of a gas station before realizing my mask was still in the truck and caught side eyes for that faux pas as well. Many states that resisted a mask requirement have changed their tune, but it’s best to follow the science that shows masks slow down the spread of COVID-19.

Prepare for fast food and hiccups before your destination

I’m an unabashed fan of fast food. I’m an eater of too many chicken sandwiches and a reader of Taco Bell Quarterly. I’ll take a Cheesy Gordita Crunch, a Quesorito, and a Baja Blast any day. Yes, fast food has its pitfalls, but it’s also a lifeline for travelers when many local restaurants are closed or operating at a limited capacity. There’s frankly never been a better time to know the ins and outs of regional fast food chains, so just embrace it.

That said, local snacks and eats are one highlight of the cross-country road trip that I missed dearly this time around. I grew up in California and went to school in Auburn, Ala., before moving to New York. I made cross-country drives (or at least across most of the country) numerous times with Daisy, who can’t fly; with Heather; and with all of us packed into one car. Stops for obscure local chips, drinks I’d never heard of, and small diners often added many happy hours onto those journeys. Quirky roadside stops and pull-offs provided plenty of time to stretch my legs and take in the scenery. This time around, the longest break was for half of a Subway sandwich wolfed down four hours from our destination.

A cliche that I’ve always stood by is that road trips are about the journey, not the destination. Pandemic road trips, however, are all about getting to the destination with as few stops along the journey as possible to reduce contact with strangers and unfamiliar surfaces. Not all is lost for the great American road trip, but the pandemic version lacks many of the qualities that make road trips great in the first place. Still, even in this diminished state, it’s the best travel option out there for now.

The post What it’s like to drive cross country during the pandemic appeared first on Matador Network.